The coronavirus, COVID-19, which originated in Wuhan, China, is spreading around the world with such speed that the World Health Organization (WHO) has declared the outbreak a pandemic. In its wake, travel restrictions have been imposed by a number of countries, including Nigeria. Flights, hotel bookings, conferences, sports events and much more have been cancelled. Schools have been shut whilst some state governments have banned any religious gatherings with more than fifty worshippers. Global stock markets are crashing while central banks are lowering interest rates and taking measures reminiscent of the 2008 financial crisis.

The pandemic has also taken its toll on businesses and their ability to perform their contractual obligations. A lot of businesses are scampering to find out whether or not they will be held liable for non-performance caused by the pandemic.

Take, for example, Prof Appleby (not his real name), a renowned American economist and author, who has agreed to deliver the keynote speech at a conference being organized by a Nigerian Non-Governmental Organisation (NGO). The conference is to take place in Lagos in late March 2020. In line with the contract signed by both parties, Prof Appleby has been paid, in advance, $30,000 as his fee for delivering the keynote address.

It was also agreed that Prof Appleby would make his own travel arrangements and bear all associated costs. Consequently, he bought a return flight ticket from Los Angeles, where he is based, to Atlanta where the nearest Nigerian consulate is located so that he could obtain a Nigerian visa. He spent the night in Atlanta and therefore had to pay for a hotel room. He has also spent $5,000 on a non-refundable flight ticket from Los Angeles to Lagos (via London).

A few days before he was to depart Los Angeles, the Nigerian government imposed a thirty-day travel ban on travelers from certain countries seriously affected by the COVID-19 outbreak (including the United States). As a result of the travel ban, which will not be lifted until well after the conference has taken place, Prof Appleby has had to cancel his trip to Lagos.

The Nigerian NGO is unhappy about this development and has demanded a refund of the entire $30,000 paid to Prof Appleby. The NGO has also threatened to sue him for breach of contract if he doesn’t pay up within two weeks. What are the defenses open to Prof Appleby? 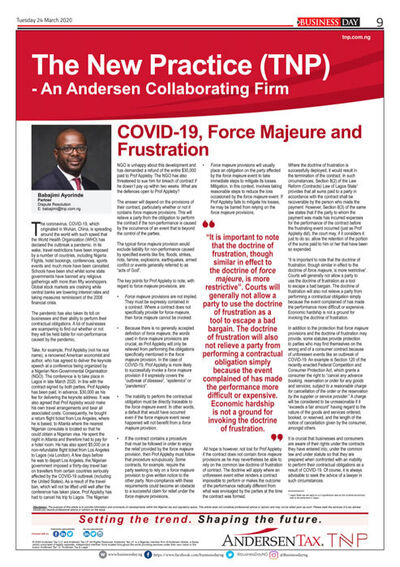